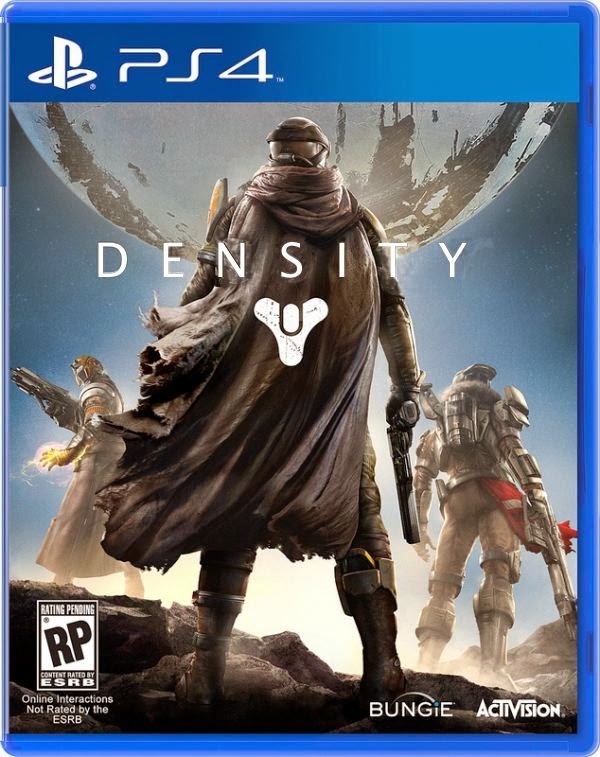 If I had to sum up my opinion of this game in one word I would need to reflect on all the inscrutable overcomplicated RPG metagame that has you mousing over builds and loadouts when you should be immersed in a mission, the complexification of a FPS through the unnecessary "show-boating" of special moves in a concentration disrupting temporary third-person perspective that should have been excised as a legacy cruft from its early development mythic fantasy adventure origins, or made the default perspective with scoped gunplay temporarily switching you into a first-person mode as in Metal Gear Solid V: Ground Zeroes (but definitely not both) or the MMO aspirations seriously undermined by a lack of opt-out proximity voice and an inabiity to find random people to Party Up with for a Strike within the game world rather than some external system menu - a lack of cohesion that curbs emergent play.

The game redeems itself with some informal cooperative free roam bounty hunting, but then ruins its developer's reputation with a PvP mode that either nerfs all your hard won loot, or lets overequipped opponents gank you in its hopelessly imbalanced Iron Banner tournament mode. It seems almost as if Bungie didn't know how to integrate PvE gear upgrades into PvP that was fair to everyone - when it is obvious to me that you don't nerf gear (or have some superfluous tournament mode) when you can just have your Guardian's Ghost transmat heavy ammo into your selected Shotgun, Sniper Rifle, or Rocket Launcher when you have achieved a killstreak that is in proportion to the devastating potential of its use.

The decision during development to make Shotguns and Sniper Rifles not be Heavy weapons, but Secondaries with limited ammo on respawn meant that all of the indoor areas encouraged ambushes and all the outdoor areas encouraged the patient camper, further depopulating the core of the map, who on retaliation found to their dismay that their shots did not cause these Snipers to descope!

Rather than give all enemies montrously thick health bars (and, often, recharging shields on top of that) with equally thick AI to balance out the encounter, Bungie should have got you to fight those that were a level below you whose behaviour was more spritely - as they danced away from your shots and made appropriate use of cover, while others split away from the frontlines attempting to flank you. I find it hard to believe these lethargic opponents came from the same studio that thirteen years ago breathed life into the Covenant and pathos into their deaths, even making me feel guilty for assassinating the dozing Grunts... I am genuinely mystified as to why Destiny's enemies and the game as a whole can be quite so dense.

Posted by Uncompetative at 09:50 No comments:

The ABCDEF keyboard layout doesn't just do the alphabet


Your first thought when looking at this keyboard layout might be 'Where's the exclamation mark!' as it would normally be found sharing space on the upper half of the ONE key. However, I really do not like the cluttered appearance of conventional keyboards, with the TWO key packing in both an AT sign and the EURO currency sign into quite a compact space. I prefer my user interface designs to be both elegant and sophisticated: elegance requires the simplicity of 'one glyph to one key' in order to not confuse matters. I also appreciate honesty, which is why each key does what it says it does, producing lowercase letters of the alphabet until the SHIFT key is held down:

It should be obvious to anyone that QWERTY is misleading by having it look like the A key will have an Uppercase 'A' appear when all it does is produce a lowercase 'a'. While we are on the subject, is it sensible to put the colon above the semicolon when a new layout can give them their own space?

The final version of the keyboard uses a piece of software called KeyRemap4MacBook to effectively rewire the FN, CONTROL and left ALTERNATE keys to be three coherently themed ALTERNATE keys. Holding @, β or ¢ whilst tapping another key will give you another glyph that is 'mnemonically associated' with that key to ease your memorisation of the underlying multiple ALTERNATE layouts - although a Keyboard Viewer undoubtedly helps here:

In case you hadn't already found it the exclamation mark we were looking for can be found next to the question mark in the middle row of the keyboard next to the 'u' key. At present I've got this all working through a temporary hack so that you get the same ALTERNATE layout whether you hold down @ or ¢ as if both SHIFT and ALTERNATE keys were being held down producing the following mix of useful Miscellaneous and Currency symbols:

Ideally, I would like the function keys 'rewired' with KeyRemap4MacBook to produce brackets, etc. at the moment you have to access them through holding either ⇧ key and tapping the appropriate number key from ONE to EIGHT.

Oh, yes... and in case you were wondering ¢ + SPACEBAR yields a TAB, whilst ⇧ + EQUALS gives you a non-breaking SPACE rather than something superfluous and outmoded like ENTER which is covered by the NEW key that occupies TAB's old home and like the top left red ERASE key proves to be more convenient to use ambidextrously in concert with the the right hand's operation of the cursor keys, or mouse click-driven cursor insertion point.

This sophisticated articulacy of expression is kept from intruding on its ordinary default usage so it remains superficially underfeatured, non-intimidating and approachable to many technophobes yet to master any form of typewriter keyboard layout for fear that they will press the wrong button, or look foolish for hunting around for minutes at a time for the next letter in a word in the scrambled layouts that are forced at them by those who have long forgotten their struggles to initially learn their peculiar arrangements.
Posted by Uncompetative at 12:58 2 comments:


Inspired by an interesting article over at Ars Technica on the DVORAK keyboard layout:

My quest to learn the Dvorak keyboard layout - by Casey Johnston

I was reminded of all the work I put into my own alternative keyboard layout a couple of years ago and thought that I may as well reopen my blog with a few remarks about what it was like and how I eventually went back to using QWERTY and why I didn't feel like it was a failed endeavour.

Indeed, it is quite nice to be able to say that you have redesigned something that has been largely left unchanged since the days of the Remington No. 2 of 1878 which is a variant of the scrambled layout devised by Christopher Sholes whose piano style keyboard with an alphabetic layout had an annoying tendency to jam as consecutive characters were flung up from below on metal arms with the repeated occurence of common letter pairs like S and T.

Typewriters had been only capable of producing BLOCK CAPITALS until Remington provided their customers with the ability to write in lowercase, with them using their new 'SHIFT KEY' (pictured on the bottom left of the above image) to switch temporarily to UPPERCASE whilst it was held down.

Sholes did not come up with QWERTY, as his ultimate layout (which his backer sold to Remington), mixed punctuation in with where we would now expect the letters to reside. For example his full-stop took the place of R on Remington's layout. Some have suggested that this is so that salesmen could impress prospective customers with the ease with which they could enter T Y P E W R I T E R with only the keys on the top row.

The popularity of this model led to widespread standardisation amongst manufacturers ever since. It seems that once you have learnt to type on a QWERTY the advantages of another arrangement (such as DVORAK), have to be pretty significant to overcome the inertia of people not wanting to learn to type all over again as well as remembering to forget their prior habituation to the first layout that they were exposed to and that most places they go everyone else is still using the de facto standard layout.

Heatmaps can be used to accumulate progressively redder colours over the keys that are (on average), used the most. So, I had a play with Patrick Wied's popular on-line realtime heatmap visualization of a collection of different (or user input) texts on established keyboard layouts:

I wanted to present an image showing that I had considered the comparative efficiency of my layout, with regards to use of both hands for the most commonly input letters in English texts, which any old typesetter will tell you are (in descending order of frequency): E T A O I N S H R D L U followed by C M W F G Y P B V K and then the more rarely used J X Q Z

I also assessed my layout for many other things:
Anyway... today I ran a quick test by re-entering the first and third samples into the textbox using the ABCDEF keyboard I had made, but with my iMac thinking it was a standard QWERTY layout so it came out all garbled - see picture at the head of this post. Although, I have got a perfectly operable alternative ABCDEF layout recognized by my OS and even got BACKSPACE to produce + and ESC to produce a BACKSPACE / DELETE, it would not have helped me to assess the utilization of my layout by both hands with the aid of this heatmap tool. I needed to make it so that typing A B C D E F gave the exact same heatmap as typing Q W E R T Y on the QWERTY layout.

As you can see the results are favourable. Both hands are in use.

Just for fun I put in a very rough version of my layout into the Keyboard Layout Analyzer:

It seemed appropriate to use the first chapter of Alice's Adventures in Wonderland for this little trip down the statistical rabbit hole, using this very comprehensive analytical tool here:

You can enter your own custom keyboard layout by dragging around keys on a virtual keyboard and then get it to spit out pie charts showing the proportion of usage of each finger typing a virtual text on that non-existant layout, total distance travelled by your non-existent fingers, etc. Great fun!

That said, I'm not another crank/advocate arguing that everyone should adopt ABCDEF even as a the first keyboard they learn to type on (although my Mother who can't type on a QWERTY layout at all found that the unscrambled alphabetical layout made it possible for the very first time for her to be able to 'Hunt and Peck'), and after a time of using it myself until I became habituated with it and liked it for all the many reasons I had put into the design, I ultimately got drawn back to QWERTY because I am simply much, much, faster and less prone to error with it due to years of habituation. That said, it is nice to have finally designed something tangible, rather than be a grouch about all the niggling little defects about what already exists. So, I am glad I took the time to make it even if it sits in a box.

Still, I thought it would be of interest, so I thought I would talk about it today.

Posted by Uncompetative at 11:41 No comments:

I have deleted all my blog posts for the last couple of years and will delete this placeholder in the future.

Apologies for any inconvenience.
Posted by Uncompetative at 11:34 1 comment: